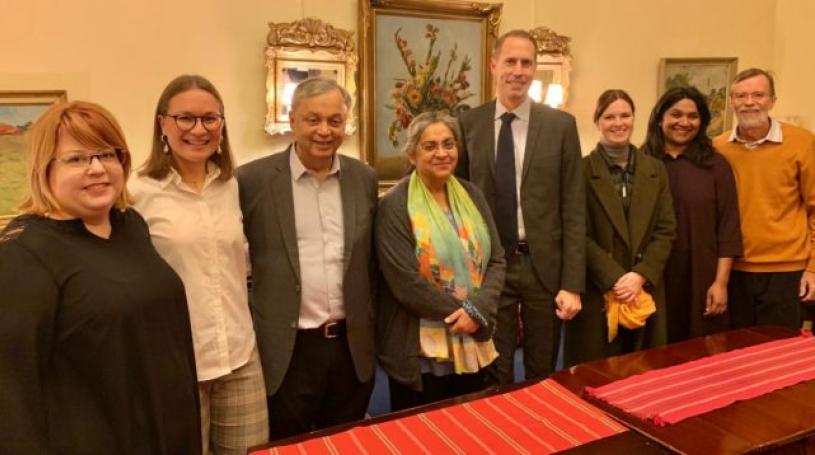 The 2019 Nobel Prize for Economics was awarded to Abhijit Banerjee, Esther Duflo and Michael Kramer for ‘their experimental approach to alleviating global poverty’. A large part of their research and the conclusions they made come from their long-standing partnership with Pratham Education Foundation and the work they have done on learning levels of children. As a member of Pratham Sweden’s Board I had the chance to sit with Rukmini Banerji, CEO of Pratham Education Foundation and Dr Madhav Chavan, Co-Founder and former CEO of Pratham for breakfast, on the morning of the Nobel Award Ceremony to better understand Pratham’s case studies.  I also got the chance to attend a Nobel Lecture held at the Stockholm School of Economics the following day to listen to the Nobel Laureates talk about their work, the way it is changing our understanding of the practice of economics, and the global movement and how they are donating their combined prize money to the Weiss Fund for Research in Development Economics, at Harvard University, to support the next generation of research.

Sweden India Business Council’s engagement with Pratham began in 2017. India Sweden Business Leader Roundtable (ISBLRT) member Carl Bennet together with ISBLRT Co-Chair Marcus Wallenberg articulated a desire to work with education and skilling. It was then that we met the indomitable Ingrid Eelde Koivisto, Secretary General of Pratham Sweden. She had started Pratham Sweden 10 years prior. One of the first to join Pratham Sweden was Magdalena Krysiak and she is still an active member of the board. As Magda says they were ‘teenagers wanting to make an impact.’ And they have done that and more.

Today Pratham Sweden has designed and oversees a consortium approach of industry support that is referred to, within the Pratham corridors globally, as the ‘Swedish Model’. Starting with 10 companies, committed to 3 years engagement, the project focuses on working with 30,000 children and improving learning levels by 2020.

During the lecture Abhijit Banerjee made a point that ‘intuition is wrong at the granular level. Scale helps us understand.’ This underscores the need to test at scale, in a randomized and controlled manner to really understand the outcomes and impact of changes implemented. One of these is testing the role of volunteers as opposed to teachers in helping children ‘learn well’. This is a question that had been asked of Pratham early on in the building of the Swedish support model. Why weren’t Pratham’s interventions done to improve an existing curriculum? Why didn’t teachers undertake the learning camps? Wasn’t this a better way to tackle the problem?

The outcome of the numerous studies done, with Pratham and Abdul Latif Jameel Poverty Action Lab at Massachusetts Institute of Technology, with Banerjee and Duflo, proved again and again that volunteers, working with the children, had a more significant impact on improving learning levels. Teachers, as Banerjee had commented on during his lecture, were too imbued in the workings of the system to do anything radically different. The Stockholm School of Economics is working with Pratham Sweden to evaluate the impact of the support from the Swedish companies, and the work being done with children in Assam. We will hear the outcomes of this evaluation in May 2020.

As Ingrid, Pratham Sweden’s Secretary General says ‘The Swedish model is unique since the choice of geography for the project was completely needs-based – it is implemented in an area where there is a low corporate presence and therefore a large need for investments in social areas, such as education.

There seems to be an interest to replicate the model in other geographies where Pratham is present – both in the mother organization in India and in other international chapters. We can already see some of the main ideas of the model spreading to other parts of the world. For example, with this as a model, Pratham only accepts three-year partnerships today since it enables long-time planning in a way that one-year partnerships don’t. I hope the model can have an even larger impact as we now look at replicating the model for SMEs as well.’

There is no doubt that this partnership will go from strength to strength, and SIBC is very happy to be able support Pratham Sweden, and the Swedish model of collective industry action.